Let me be honest with you… political correctness has gotten to the point where it makes my head spin.

Though in principle I understand the importance of taking in to consideration the beliefs of others, and while I do my very best at all times to show respect towards others, it has gotten to the point where I now find myself panicking in certain situations for fear of saying the wrong thing and being unfairly labeled as either uninformed or, worse yet, intolerant.  Indeed, dare I say that it has gotten to the point where political correctness is creating intolerance amongst those who are allegedly its greatest champions.

The most recent example in my own life was when I held the door open for a woman as we were both entering the same building.  Why did I do so?  I did so because I was raised with the notion of ‘ladies first’ on the basis that it’s polite.  Having also been raised with the notion that men and women are equal, as well as the notion that no one person is ‘lesser’ than another regardless of gender, race, religion, sexual orientation or otherwise, I never once held the door open for a woman for any other reason than it’s polite.  Of course, as a child, the women I most often held the door open for were my Mom and my Oma (Grandmother) who always thanked me and gave me a smile.  Thus, imagine my surprise when I held the door open for this woman only to be greeted with a barrage of condescending remarks that had me literally stunned.  Like a deer in headlights all I could do was stand there as my brain attempted to comprehend what was happening.

It began with a snide “I don’t need the door held for me” to which I replied, “I was just trying to be polite”.  What ensued was a lecture (almost as though it were rehearsed) that included everything from her ‘independence’ to my ‘white male privilege’.  As I stood there and contemplated a response I very quickly felt my otherwise polite demeanor begin to leave me.  On the verge of offering my own thoughts about her behaviour I then remembered another value I was raised with – always take the high road.  So, I smiled politely and said “I’m sorry I made you feel that way” and walked away.

The story above is just one of a few examples where, despite doing my absolute best to always be respectful and polite, I was met with unjustified hostility.  As you can imagine, this is why I have a challenging relationship with the notion of political correctness.  However, as much as I feel as though the notion of political correctness has gotten just a little bit out of control, I also strongly believe in freedom of expression and the fact that everyone is entitled to their beliefs.

This brings me to another interesting notion… the balance between freedom of expression verses basic decency.  This is a topic that I am intentionally writing on this first week of November, prior to Remembrance Day.

While I may have a challenging relationship with political correctness, and whereas I also completely respect the fact that everyone is entitled to their beliefs, there are a couple of things that I feel strongly about where political correctness and personal beliefs are secondary to the greater good – one of those being anything to do with Christmas activities prior to Remembrance Day.

As it stands, Christmas has already become such a hyper-commercialized spectacle that the essence of Christmas – and by that I don’t necessarily mean the story of Jesus (though, for me, that’s what Christmas is about), but rather the sentiments of loving and caring for one another – is almost all but forgotten.  However, almost nothing offends me more than when I hear Christmas music or see Christmas anything prior to Remembrance Day.

Coming from a military family (readers may remember that my step-father spent 11 years with the Canadian Forces Military Police (Airforce) prior to his 29 years with the Vancouver Police Department) I firmly believe that Remembrance Day is a day that should be spent in solemn reflection as we contemplate all those who have lost their lives – as well as those currently serving – in defence of the freedoms and security we enjoy today.  To that end, I find it gut-churning when I see anything Christmas related going-up before November 11th.

Now there are those who will argue that because of the freedoms we enjoy that putting up decorations and turning-on Christmas music before November 11th is a ‘tribute’ to the sacrifices made by others.  That, however, holds little credibility in my eyes because I see that as selfish.  Why?  Because even though there may be some semblance of merit to the argument the reality is that by-and-large those in uniform – not to mention those who have lost loved ones in uniform – do not see it that way.  Thus, if it is their sacrifices that we are remembering than we should do so in a manner that best speaks to their beliefs.

In closing, though I am the first to admittedly roll my eyes at times when it comes to this hyper-politically correct world we live in, I would like to think that we could all get on the same page about not celebrating anything Christmas related until after Remembrance Day – and not just because it’s politically incorrect to do so (irony intended), but because it is simply wrong.

On that note, I for one will not shop at any store that has Christmas merchandize for sale or music playing – nor will I enter someone’s home that has Christmas decorations up – before November 11th.  To that end, I invite you to join me in taking such a stand so that when Remembrance Day arrives on November 11th it is given the respect and dignity it deserves.

Previous issues of For the Record can be found online at www.patrika.ca/for-the-record.

New BC Liberal Leader Must Define Himself Early 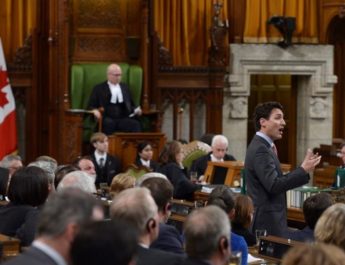