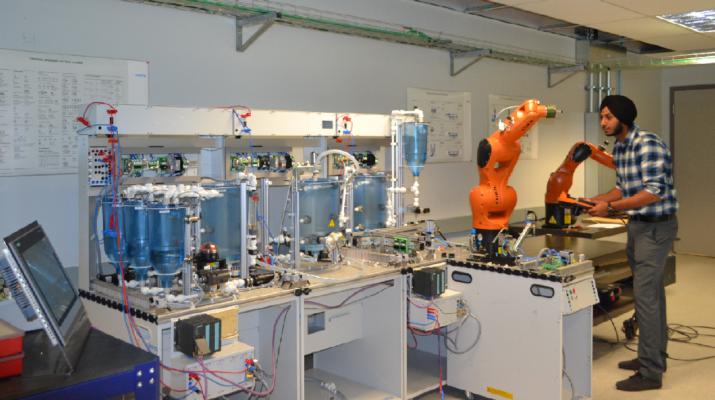 The University of The Fraser Valley offers an exciting one-year certificate for Electronics Technician Common Core and two-year diploma for Automation and Robotics Technician. The Patrika had a chance to discuss and look at what makes this program so great and the applicability of the program in Abbotsford’s agriculture technology sector with Joel Feenstra. Joel is one of the instructors in the Automation and Electronics Faculty of Applied and Technical Studies at UFV’s Trades & Technology Centre, and usually shares teaching duties with Avner Bachar, who was away in Ontario taking more robotics courses at the time of the interview.

The full program takes two years to complete fully, although students can exit after the first year with just their Electronics Technician Common Core certificate.  That electronics program is the prerequisite for the 2nd year automation classes. That electronics program prepares students for a range of entry-level technical service positions through practical hands-on lab work, classroom-based lectures, group activities, reading assignments, and practice problems. In the second year the Automation and Robotics Technician diploma builds on the knowledge students gained in the Electronics Technician Common Core program at UFV or elsewhere. They learn how to program and wire microprocessors, hydraulic and pneumatic systems, industrial robotic arms, and the Programmable Logic Controllers (PLC’s ) that take care of almost all automated processes in industry.  After graduating from UFV’s Automation and Robotics Technician program, students will have the skills and confidence to build, maintain, calibrate and integrate automation and control systems. These skills can be applied in a wide variety of sectors including agriculture, industrial manufacturing, and the oil and gas industry.

While at the Trades & Technology Centre, we had the chance to meet Jasjit (Jas) Randhawa, a recent graduate from this program and the first Indo-Canadian to graduate from this program. Jas was able to show some of the knowledge he has gained, with an automated robot that mixes recipes, bottles and packages berry juice into flats with a touch of a few buttons. Jas has recently been hired at a berry processing plant, and his plans for automation are quite exciting.

What prior experience or training do students require for these programs?

Nothing at all. You could come into the electronics program with no prior knowledge of electricity and graduate 9 months later being able to understand and build a circuit board. As long as students have the desire to learn and the drive to study hard, they can be successful.

What potential improvements could be facilitated in the agricultural sector by Automation and Robotics?

There is a lot of time and money that can be saved in all processing activities by automating the systems. Doesn’t matter if it’s fruit, vegetables, or meat, all those systems are automated.  Machines and robots are much better and faster at doing repetitive jobs than humans.  They can work long shifts, don’t get cold, tired or take time off.  In the berry processing, these systems can process fruit so much faster so there is a lot less low-grade fruit due from spoilage on the loading docks.  By automating processing lines, you can also make daily plant operations easier and keep the line flowing without backups or prevent spills.  Lumber processing has been done through automated systems for year.  In raising animals for meat, all of their environment, feeding, and hydration is controlled with automated systems.  Even dairy cattle are being milked mostly by robots in the Fraser Valley now. And all of these areas are continuously evolving and need fresh ideas as well as routine maintenance.

Is there a high availability of jobs in this field of work?

There are a lot. Especially for technicians who are fluently bilingual in English and Punjabi.  One of the biggest challenges for me when I was doing this work in the local plants before was that I spoke no Punjabi.  Sometimes when something is not working, you need to ask a lot of questions from the plant workers to figure out what the issue was.  As well as it was hard for me to be able to train people how to operate complicated systems when everything needs to be done through an interpreter.  Someday someone is going to make a lot of money just running a company is staffed with workers who know how to service and fix machines during processing season.  Especially working on some of the foreign machines that companies ship here, but don’t have anyone to service them locally.

In terms of Automation and Robotics, many believe that it will cause a reduction in the availability of jobs for humans, what are your thoughts?

You’d have to be crazy not to see and believe that.  There will steadily be fewer low-paying labor jobs as the prices for automated systems come down.  Look at something as simple as dumping totes of berries onto a belt.  So many companies now have machines that do that instead of hiring a person to do something that menial.

But where robots don’t have an edge is in the area of imagination.  Humans are still needed to dream up, build, and maintain these systems.  If robotics and automation are going to take over the labor end of the industry, it just makes sense to train for what they can’t do. And that is creating, installing and fixing those systems.  So yes, it can appear that jobs are being lost to automation.  But there are also new jobs being created because of that same automation.  It is actually an industry transformation from labour to intellectual work.

Where in the Automation and Robotics field does your greatest satisfaction come from?

What do students like and dislike about these programs?

It is a lot of work. Some students don’t like that.  You have to be creative and hard-working, and students need to be able to study and research on their own.  There is just no way that we can teach them everything they need to know in 2 years.  But we do teach them most of what they might run into, and have hundreds-of-thousands of dollars of equipment for them to learn on here at the university.

A lot of what they do is also highly addictive.  It becomes a bit of game, trying to get a system to respond and do something for you.  Most days we need to kick students out of the lab hours after class ended.  They get so absorbed in their work, and don’t want to leave.

We do also think that the relevancy and teaching are also important to students.  Avner and I are both passionate about teaching these skills to the next generation and we have a lot of fun teaching the students and helping them in labs.

Is it hard to get into the program?

The entry requirements are covered in most people’s high school education. And since it starts in September, this year’s graduates would be able to possibly still get in.  There is a waitlist most years, and this year there are only as few spots left for this one, and people are already applying for next year as well. 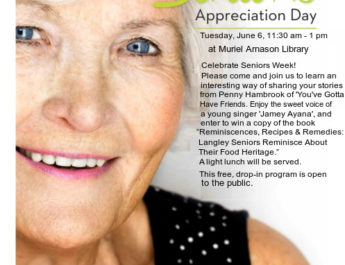 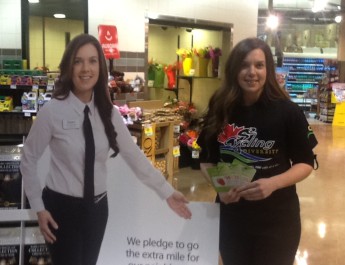 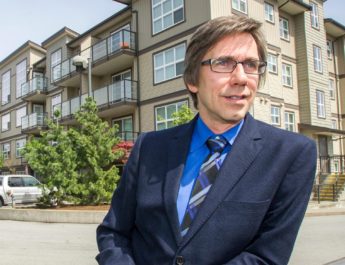